Fruits of our Labour Yarning Forum

Fruits of our Labour Yarning Forum 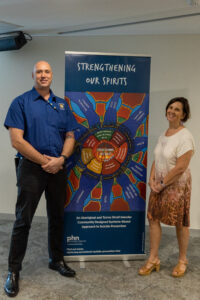 Last Friday, we hosted the ‘Fruits of our Labour Yarning Forum’ where service providers for the National Suicide Prevention Trial (NSPT), a national trial aimed at reducing suicide attempts and deaths, came together to discuss its progress.

Noel Tomes said, “Today’s been a very positive event. It’s been so good to see all the feedback from the providers. It’s very indicative of how the community has participated in the trial process. As a coordinator, I’d say that the trial has been very successful for the community.”

Back in 2016, the Greater Darwin region was chosen as one of two Indigenous-only sites (along with the Kimberley in WA) from a total of 12 regions to run the trial.

Approximately half of the suicide-related deaths in the Northern Territory occur within the Darwin region. Young people, males, and Aboriginal and Torres Strait Islander people are statistically over-represented. 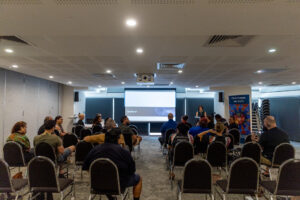 The Australian Government provided funding for developing and implementing a systems-based approach to suicide prevention at a local level for at-risk populations. Designed by members of the Greater Darwin region’s Aboriginal and Torres Strait Islander community with lived experiences of suicide, the Strengthening Our Spirits model emerged. 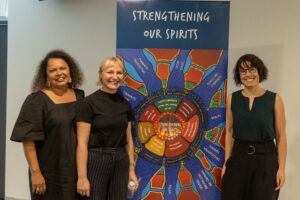 Strengthening Our Spirits represents an Aboriginal way of knowing based on the elements of fire (our spirit), land (our mother), air (our healing) and water (our identity). Self-harm and suicide create an imbalance in this system which has provided Indigenous people with everything needed to survive and thrive for more than 60,000 years. The model is a way for community and service providers to align this system.

During the talk, speakers revisited the challenges and successes of the trial and focused on the steps towards continuing the model and implementing it at a bigger scale.

Danila Dilba CEO Rob McPhee said, “It’s taken a lot of time and effort from a lot of people, and today’s an opportunity for us to reflect on all the work that has been done and what we need to do moving forward.”

We acknowledge the Traditional Owners of the country on which we work and live and recognise their continuing connection to land, waters and community. We pay our respect to them and their cultures and to elders past, present, and future.