A suicide prevention model developed in the Northern Territory will be available nationally to help reduce Indigenous suicide rates across the country.

The ‘Strengthening Our Spirits’ (SOS) model will be adopted by the Centre of Best Practice in Aboriginal and Torres Strait Islander Suicide Prevention (CBPATSISP), a leading national research organisation on effective suicide prevention approaches for Indigenous people and communities.

NT Primary Health Network CEO, Gill Yearsley, made the announcement yesterday at an event to celebrate the conclusion of the Australian Government’s 6-year National Suicide Prevention Trial (NSPT), which saw Darwin included as one of 12 sites involved in the trial from around Australia.

The SOS model was developed as part of the trial through extensive community and stakeholder consultation and addresses the specific needs and priorities of the local community in response to the high suicide rates of Aboriginal and Torres Strait Islander people in the Darwin area.

Aboriginal and Torres Strait Islander people are twice as likely to die because of suicide than non-Indigenous people, while for children and teenagers the rate is 4 times as high.

Ms Yearsley said NT PHN has worked closely with stakeholders to develop a framework for the SOS model so that it can now be used by organisations not only throughout the NT but around Australia as well.

“This is fantastic recognition of the Darwin Suicide Prevention Trial and the many programs, initiatives and successful collaboration that helped develop the SOS model over the past six years,” she said.

“Our First Nations people are grossly over-represented in suicide statistics, which is heart-breaking for our local families and communities. We need to do more.

The release of our new SOS framework will help guide organisations and service providers on how to embed the model into current and future suicide prevention programs and activities to achieve meaningful outcomes for Aboriginal and Torres Strait Islander people.”

“In addition to the SOS model, we had some great success with pilot programs during the trial with 5 of these activities now extended for the remainder of this year and more set to receive funding to continue over the coming years,” said Ms Yearsley.

“This is just the start. We know there is much more work to do and the success of our Darwin trial will help guide our way forward to achieving meaningful outcomes in suicide prevention in the Territory.”

The ‘Our Way Our Say’ program by Headspace was one activity funded under the trial.

The program, led by an Aboriginal advisory board made up of key Aboriginal leaders from the Darwin community, developed culturally safe social and emotional wellbeing training resources for young people in Darwin schools.

“The Our Way Our Say pilot program is currently delivering the 22 session pilot to 5 schools and 10 groups of students in Darwin middle and senior schools,” said Michele Oliphant from Headspace.

“Through the trial, we were able to identify a gap for suitable suicide prevention resources in our schools that hit the mark. Thanks to the trial we were able to train teachers and educators and are now piloting our sessions to students who are showing early signs that they are starting to be more comfortable talking about mental health and social and emotional wellbeing on their terms.

“Now that the pilot program is underway and we are seeing some very promising outcomes, we will be looking for funding to expand the program outside of Darwin which is very exciting.”

For more information on the Darwin NSPT, go to ntphn.org.au

The Strengthening Our Spirits model draws on the concepts and symbols that are meaningful for Aboriginal and Torres Strait Islander people, and links these to key elements that are important when taking a systems-based approach to the prevention of self-harm and suicide.

The model’s powerful artwork – by local Aboriginal artist Tony Duwun Lee – depicts the 4 elements of fire, land, air and water – and how self-harm and suicide creates an imbalance in this perfect system which has provided Indigenous people with everything needed to survive and thrive for more than 60,000 years.

The Strengthening Our Spirits model includes: 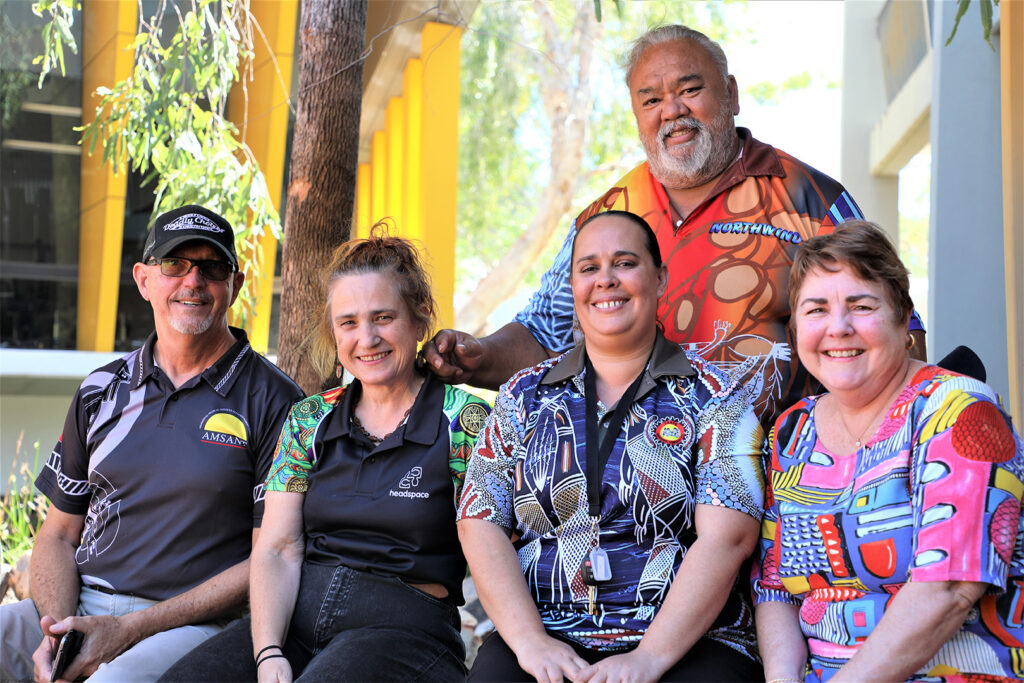 We acknowledge the Traditional Owners of the country on which we work and live and recognise their continuing connection to land, waters and community. We pay our respect to them and their cultures and to elders past, present, and future.